On Tuesday the 2nd of February 1982, from Kerr’s original premises at 54 Separation Street North Geelong, Company Directors Gary and Heather Kerr began their Geelong Victoria owned and operated hire company "Kerr’s Northside Hire." They believed that Geelong Victoria needed a locally owned company due to the recent acquisition of Geelong Hiring Service by Wreckair Hire in 1981. The company started with Gary and Heather running the office with one driver/mechanic employed in the yard. Help also came from Gary’s parents Reg and Marie.

Gary Kerr, Director & company Founder explains how things started for the business. "On the first day of trading we had 4 customers and $77 worth of sales. By the end of the month we had only $4000 worth of sales. This allowed us to only pay off 70% of our debts. But by our first birthday, monthly sales had increased to $20,000." 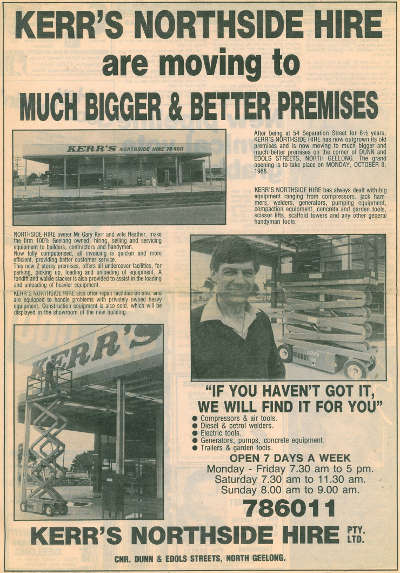 Kerr’s Northside Hire quickly expanded, taking on major contracts from Australian Cement Limited, Pivot Fertilisers & Danum Engineering, all important businesses in Geelong’s industry. In response to demand and with this expansion, Kerr’s grew out of their premises in Separation St. In October 1988, Kerr’s moved into its new home, a purpose-built hire building on the corner of Dunn & Edols St. While moving into the new building, Kerr’s Northside Hire installed a computer system that could handle the high volume of customers it had now attracted.

In 1998 Kerr’s expanded its staff to a total of twelve, including a new hire controller and mechanic so the company could better service the growing market in the region. Jarrod, Gary’s son had begun working in the business since he was 15 and during this time held roles as a mechanic & driver. Jarrod was promoted to the position of hire controller in 2003 which sought to combine his wealth of experience and knowledge of the equipment from the workshop into the front office. In 2017, Jarrod was appointed General Manager and today enjoys focussing on growing all aspects of the business.

In early 2006 Kerr’s expanded their sales & service side of the business to include a larger showroom that displays ready-to-use equipment for sale for the local building and construction industries. This is complemented by Kerr’s service and repair division for several well-known brands such as Wacker Neuson, Flextool, Crommelins, Spitwater, Graco & Wagner.

On Friday February 2nd, 2007, Kerr’s celebrated 25 years in Geelong, inviting all customers along to a successful "tradie breakfast." The day included a mini tradeshow with displays from all current suppliers as well as t-shirts & stubby holders given to customers & staff that attended.

2009 was a busy time for Kerr’s Northside Hire even though the global financial crisis had struck many Geelong industries, Kerr’s Northside Hire was still finding the demand for hire was as strong as it was in 2008. In 2009 the decision was made to remove the "Northside" portion of the business name, reflecting the direction that the business intended to take, which was to incorporate wider Geelong. Jarrod explains, "The Kerr’s in our name is our brand. We felt that the Northside isolated us to only the North Geelong area; this needed to change moving forward."

In June 2009 Kerr’s began discussions with other locally owned business owners, Barry & Keith Fagg from Fagg’s Mitre 10. They worked together to enable Fagg’s Mitre 10 to offer a total hire solution to their customers. This new venture included the purchasing of Fagg’s Mitre 10 hire tool departments located at both their South & North Geelong stores, as well as giving Fagg’s customers greater access to a larger range of equipment. In August 2009 this resulted in opening of the Fagg’s Mitre 10 Agency Branches. This was a successful venture for both Kerr’s Hire and Fagg’s Mitre 10 over the duration of the 3 years in which it was offered.

Continuing with a very busy year, in September 2009, Leading Hire, located in Grovedale was to shut its doors on the 1st of October. Discovering this, Kerr’s Hire began making steps to acquire the locally owned business and set it up as a 2nd Kerr’s Hire branch. This branch gave Kerr’s the location and the personnel to grow their business on the southern side of Geelong. Kerr’s Hire customers now benefited from the same level of high quality service and equipment that was offered at their North Geelong branch.

This newly established Grovedale branch continued to grow throughout 2010. Kerr’s increased their staff to include a full-time driver to cope with the increased turnover that they had generated, which continued into the following year. In early 2011, an additional 2 blocks of land were purchased at 21 Essington St. in Grovedale, to build the new Kerr’s branch for the future. This current branch opened at this site in October 2011.

In December 2016, Kerr’s Hire purchased Bellarine Hire situated at 2-4 Smithton Grove, Ocean Grove. This expansion sought to bring the large range of Kerr’s equipment on offer to the Bellarine Peninsula. Jarrod explains, "We saw this as a perfect fit for all of our present and new customers who live and work in the Bellarine region. It gives us the ability to provide a greater range of equipment to service their needs." In 2019 Kerr’s Hire’s plans to expand their Bellarine Branch to a purpose-built building on their current site. The new modern facilities will allow the Bellarine Branch grow for the future.

Kerr’s Hire prides themselves on being a local family business that strives to support other local businesses. As we look to the future we plan to continue to supply local customers with high quality equipment and great service. We would like to thank all of our customers who have supported our business and have watched us grow over the last 38 years. Kerr’s Hire is Geelong’s and the region’s largest hire company and "Your Local Hire Company since 1982."'